Our story: Barrel + Beam in the Northwoods

On a visit to Marquette County in the spring of 1933, Fred and Emma Klumb traveled the windy road that was then highway 41 to the Queen City.  They fell in love with the area and decided to sell their Wisconsin farm and buy eight wooded acres in an area that was then several miles from downtown.

People said the Klumbs would lose their shirt, starting a supper club during the depression at a time when most people did not have a car.   Nevertheless, Fred and Emma along with their two daughters built the cabin while living in a tent.

The Northwoods Supper Club opened in 1934. Before the restaurant closed in 2007, it would undergo numerous renovations and multiple additions and wear out multiple dance floors.  It was once the second oldest restaurant in the state.  At one time they went through 25 tons of beef and 2 tons of coffee annually.  The quality of their food – all made from scratch – and their impressive beer and wine selection was unsurpassed.

Fast forward to 2016.  The building – which once had capacity for over 700 – was in complete disrepair.  The interior was completely stripped.  It’s once majestic fireplace – made with 22 different minerals— gone.  Pigeons and squirrels found refuge using the holes in the ceiling.  The magnificent gardens and landscaping were completely overgrown.

But, the logs were still as strong as ever and the spirit of the Northwoods remained.  Struck by the strong beams and hand-hewn logs, and the incredible history of this special place, we decided it would be the home of Barrel + Beam.

The parallels of our businesses are similar.  We pride ourselves on creating products with an unwavering commitment to quality.  For us that product is handcrafted farmhouse and barrel aged ales and ciders.  For the Klumbs, it was their infamous chicken dinner and just about everything else made in the kitchen.  We’re making beer with the most premium of ingredients at a place that is off the beaten path.  And we would be honored if many a special occasion was celebrated with a bottle from Barrel + Beam. 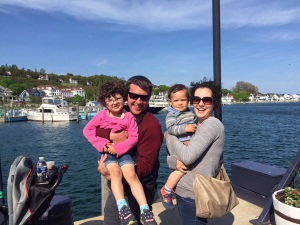